How Plants Get Their Names 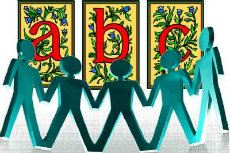 Botanical names of all plants known on Earth are universally written in Latin. For most backyard gardeners, this system may seem overwhelming to remember and frustrating to understand. To understand why this system of naming has be adopted it is important to understand a little about the history of gardening.

Plant collecting especially for food and medicine has occurred since before written records of any civilization were kept. Historical accounts credit Theophrastus as creating the first botanical garden during the rise of the Greek Empire. Thus many of our plants carry names with a Greek derivative.

The Romans learned a lot from the Greeks through merchants, scholars and priests. This included a strong interest in gardening. As early as the Caesars, the Romans had far surpassed the Greeks in style and understanding and gardening had reached new levels of expertise. Spectacular cascades flowed from terrace roof-tops, elaborate water gardens and public botanical gardens were common.

Gardening reached peaks of excellence under the Romans never seen before or since. Thousands of plants were collected from the entire territory they dominated. Each was named and classified in Latin. After the fall of Rome the world sunk into a Dark Age for over a thousand years. Gardening, scholarly pursuits and any remaining shreds of civilisation were maintained by the priests and monks of the Church.

For protection during these violent times, the priests lived in walled monasteries that often resembled a small fortress. Here they continued to garden for survival and collected and catalogued plants as a further pursuit of knowledge. As these priests spoke and wrote in Latin, all the newly discovered plants also received Latin names.

The printing press helped bring the Renaissance that helped spread the priests’ knowledge to the public. Later soldiers returning from the Crusades brought back many more plant species from foreign lands, most of which were also given Latin names by the Church priests. The rise of the French, Spanish and especially the British Empire brought together massive plant collections from all over the world.

The difference here was that while these new discoveries received Latin sounding names, many names were only a slight disguise for the name of the explorer who discovered them. Soon plants were being named after all sorts of people who wanted to be remembered rather than being classified with a Latin description of the plant.

As the British Empire ruled the waves and botanical collections developed from around the world, it became the responsibility of the Royal Horticulture Society based largely out of Kew Gardens in London to catalogue every plant. In recent times this responsibility has fallen largely on the Smithsonian Institute, Washington, D.C. based out of Longwood Gardens.

Because Latin had been traditionally used as the universal language of plant classification since man’s first gardens, it was accepted as the easiest way of describing a plant so that gardeners in any language could understand.

Thus today plants are classified with four names always written in order starting with it’s Family, Genus, Species and Cultivar or variety. The Family name represents the large, general order to which the Genus belongs like Composite Family (meaning “compound”) which includes all plants that resemble daisies.

Genus represents a group of species within that family that all resemble one another like Helianthus (Greek for Sun/flower indicating also that this plant has been cultivated since antiquity). The Species name indicates a single distinct kind of plant with characteristic features within that Genus.

In this case, “annuus” is the species name meaning “annual”, or a plant flowering for only one year. The Cultivar or Variety name comes last. This describes a special variety of plant that is distinctively different from any other in that species like “Giant Mammoth” alluding to this plant’s great size. Thus we have in this case: Compositae, Helianthus, Annuus, Giant Mammoth: The Giant Russian Mammoth Sunflower.

While this classification system many appear confusing and indeed it is a relic from our ancient past, it is the best Man has invented to describe the huge world of plants. Were we to revert to calling plants by their common names, each nation and language would develop their own names for the millions of plant varieties and soon all that would be left would be confusion in Man’s illusion of an ordered world.

But call a rose by any name and it will still be a rose!